A knife from the shadows. 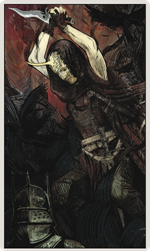 Argent was named the old Orlesian word for “quicksilver.” She is swift, strong, and deadly—trained from birth to be a weapon. Argent has served many masters, sometimes as a bodyguard, often as an assassin. Passed from noble to noble, she was bought and sold like a prized sword, a fact that does not bother her. A weapon has no loyalty—it serves whoever wields it. Now, the Inquisition wields Argent.