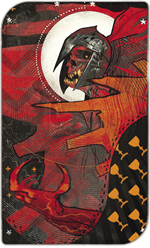 “We could have held off a battering ram, but the behemoth? It took the gate off at the hinges. Then it screamed. Not a roar or growl—a scream, all rage and pain. As I drew my blade, all I could think was: ‘There's a templar in there.' Somewhere in that thing was a brother or sister of the Order; every fiber of my soul was crying out to them. But whoever it might have been, whoever's son or daughter, they were lost to us, swallowed by corruption and lies. I held the only way I could, the only way any of us can. We must end their suffering. And, Maker willing, we must try to remember them as they were.”

— From the reports of Knight-Captain Veddir, Tactical Considerations for the Inquisition