Blackwall is an NPC in Dragon Age 3: Inquisition who may join your party as a Companion.

"The Grey Wardens hold a lonely vigil, enduring lives of hardship and sacrifice to protect the world from an evil that can never truly be conquered. Few would volunteer for this: the suffering, isolation, and promise of a violent death. But the path of a Warden is also one of valor, and those who give themselves to the cause are rewarded with the knowledge that they have become something more than they were. Blackwall is one of the rare few Wardens who chose, of his own accord, to pick up the shield. He believes so wholeheartedly in the noble ideal of the Grey Wardens that he would rather have this life than any other."

How to Romance Blackwall

Blackwall is one of the few remaining Grey Wardens. Having been isolated from society, he is awkward in social interactions but a skilled warrior. Players looking to romance Blackwall must relate to his vocation as a Grey Warden. 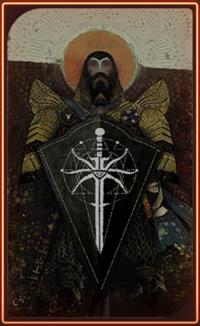 Blackwall Approval  is determined by your choices in conversation and in the game decisions in Dragon Age: Inquisition. Below is a list of all his reactions to quest and personal dialogue. Special Approval: Killing Darkspawn with Blackwall in your party will grant "Blackwall Slightly Approves" (+1) at random intervals. Approval rating may be checked at the "Gather Party" screen by observing the cards, or by the interactions with the NPC.

Memories of the Grey

Collecting these Grey Warden artifacts around Thedas will grant you ( +3) Approval with Blackwall. There are a total of 8.

"...Let him come. I swear I'll take the twisted bastard down, even if I have to die to do it."

"...It's good to be part of something so important, something that could change things."

"...Someone told me that once. Took me years to understand what he meant."

"...Put aside his own ambitions to help me win the melee. I don't think I ever thanked him."

"...But now I believe I made the right decision after all."

"...I should've gone with him. Perhaps things could've been different."

I've A Hankering For Company

"...we could make the world better. It's just easier to shut our eyes."