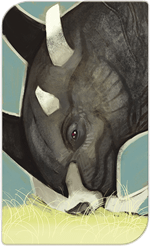 ““The dwarven Shaperate originally bred this hulking beast as a beast of burden and food source, the rough equivalent of surface oxen and cows. Some versions of the bronto have even been developed as dwarven mounts, valued more for sure-footedness and stamina than speed. While present in Orzammar in large numbers, some brontos still exist in packs in the Deep Roads, having returned to a wild state after the fall of the dwarven kingdoms. They require remarkably little sustenance, absorbing nutrients from water, fungus, and even rocks (hence the “rock-licker” appellation many dwarves use to describe brontos), and exist primarily in a dormant state until provoked. An angry, charging bronto is considered a rather dangerous opponent.”

— From Tales from Beneath the Earth, by Brother Genitivi