Cassandra Pentaghast is an NPC in Dragon Age 3: Inquisition and your first companion.

"Though of noble birth, Cassandra Pentaghast turned her back on a life of wealth and privilege to join the Seekers of Truth. The ancient order serves as a watchful eye over corruption and magical threats, granted ultimate authority in its investigations by the Chantry—or it did, prior to abandoning their duty in response to the mage rebellion. Cassandra did not join her brothers in this, instead remaining loyal to Divine Justinia and her efforts to restore order in the face of chaos. She is both pious and driven, the sword in the right hand of the Divine, seeking justice above all else."

How to Romance Cassandra

Cassandra Pentaghast is the Chantry's Seeker and "Right Hand" of the Divine. Following the death of Divine by the explosion from the Rift, Cassandra becomes one your first companions. Cassandra is a religious and driven character, who seeks justice and values resolve and strength. Players looking to romance Cassandra must relate to her Faith and her quest to restore Order. 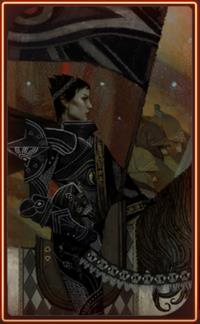 Cassandra's approval rating is determined by your choices in conversation and in the game decisions in Dragon Age: Inquisition. Below is a list of all her reactions to quest and personal dialogue. Approval rating may be checked at the "Gather Party" screen by observing the cards, or by the interactions with the NPC.

Cassandra asks you to help her hunt down 5 targets. Each one killed with her in the party grants ( +3) Approval.

The Wrath of Heaven

"...How do you think we should proceed?"

"...The breach is stable, but it is still a threat. I will not ignore it."

"...Providence. The Maker sent him to us in our darkest hour."

"... Do you consider the Free Marches your home? Are you eager to go back?"

To Connor (if he is alive in your game) in Redcliffe Village:
"...The boy with Redcliffe blood on his hands"

Approach Cassandra at Skyhold and initiate conversation.
"I don't deserve to be here."

Approach Cassandra while she is reading a book:

Convincing Varric to give Cassandra the next chapter of Swords and Shields: ( +3)

During Someone to Lose. If you tell Emalien: