Cole is a  Companion in Dragon Age 3: Inquisition.

He is a ghost in the shadows, walking unnoticed through crowds. He can slit an enemy's throat before they even realize he's there, and slip away, never to be seen again. Those few who do notice him soon forget he ever existed… and Cole isn't certain that he does exist. He is a spirit, impossibly caught between the immaterial realm of the Fade and the confusing realities of our physical world, but does that make him real? Does it make him human or a demonic pretender, as some believe?

All Cole knows for certain is that the world is full of pain and he must find his place within it. Those who wish to restore order and help the helpless will find him a strange but unwavering ally. Those who use their power for selfish reasons may never see Cole again—if they remember that he was there to begin with.

How to Romance Cole

Cole is not available for romance. 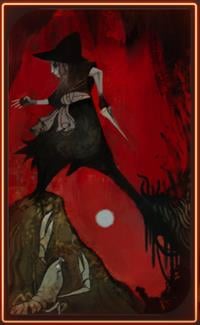 Cole's approval rating is determined by your choices in conversation and in the game decisions in Dragon Age: Inquisition. Below is a list of all his reactions to quest and personal dialogue. Approval rating may be checked at the "Gather Party" screen by observing the cards, or by the interactions with the NPC.

During this quest, ( +2) for each lock opened. There are 7 in total

Cole appreciates compassion and helping the needy. He will dislike if you chose to imprison enemies, and will appreciate a gentle approach.

During the quest Somone to Lose:
If you tell Emalien: