Crestwood is a region in Dragon Age Inquisition. It is located north of Lake Calenhad in Ferelden. 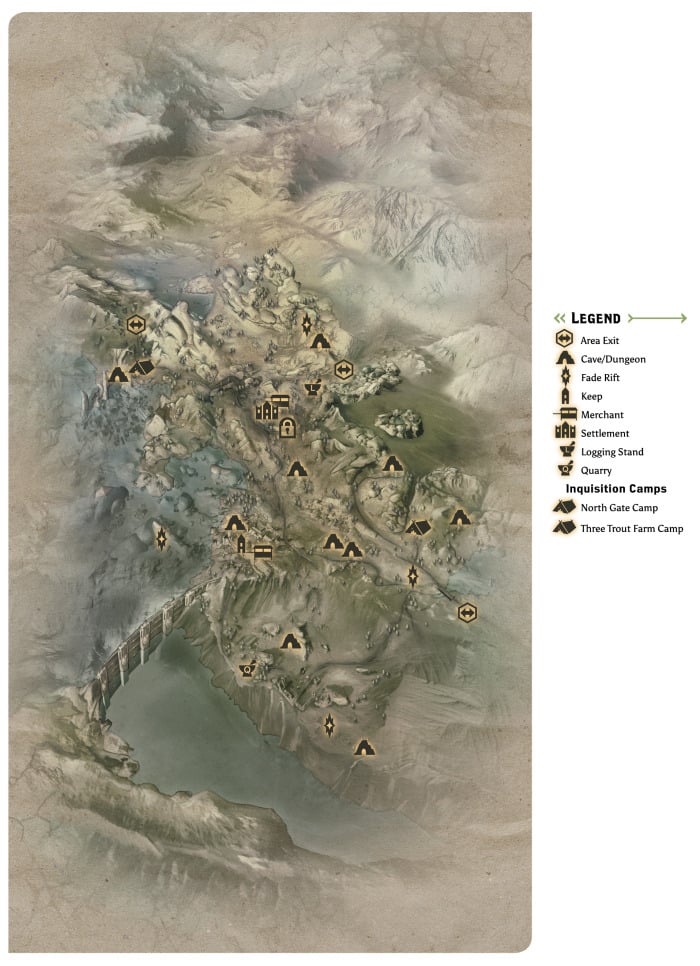 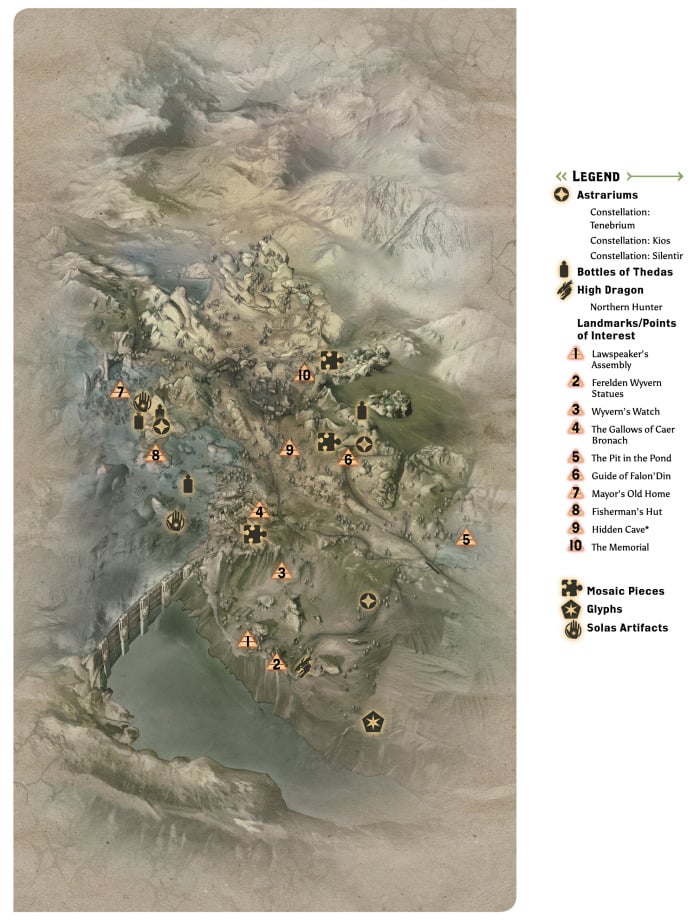 You will want to be level 8 to access Crestwood. During the main quest From the Ashes, talk to Varric in Skyhold to trigger a cutscene, then make your way to the war room, highlight the Ferelden area, and choose Find the Warden in the centre.

Once you arrive, help the front guards drive off the Corpses and enter the town. A man inside will tell you to talk to the mayor. One of the houses on the right (the far one) has the Crumpled Letter codex inside it. There's also a house boarded up near that. The house to the left has a man you should talk to to get the "The Naturalist" quest, which is  covered later.

Onto the mayor's house. It is up the hill, the highest house in the small village. Enter and talk to the mayor to see what you can do. Convince him you are here to help and he'll mention the fort which is occupied by bandits and  has the dam controls. While you are in the house, grab The Anderfels codex from the corner.

While you are close to Crestwood, you should make time to head northeast a bit to a plaza with the "Memories of the Drowned" landmark, a Logging Stand, and a woman who will give you the "Homecoming" quest.

NOTE: Capturing this keep is considered a separate quest in this area but it is needed to do this quest.

The keep is to the south of Crestwood. Very hard to miss. Head to the old Marketplace Road and follow it southeast to the keep. Bust the door in. You'll be greeted  by two armored Mabari and archers on the roof. Take out the pups and you can either use the stairs nearby to jump over to the roof or just use the ladder. The fighting will draw down two foot soldiers, so be ready for them.

Move further in to a courtyard. Ignore the ladders to the left for now and charge the stairs. A shielded guardsman is up here, but beyond him are some archers. Foot soldiers and Prowlers will join the fight as it goes on. Kill them all. At the top head left through the door to the upper area (this is where the left ladders go to). The doors here are locked, so ignore them and head through the archway ahead, going right.

You can replenish potions here. Head up above and kill the two lieutenants and archers you find. Up ahead is the Highwayman Chief. He'll come at you on the narrow battlement, meaning you can have your tank easily block him off and lay down death on him. He is a two-handed warrior and functions just like the brute enemies you've seen before. Be sure to loot him once you kill him for the unique two-handed weapon The Last Stand. Once you kill him, go past him to the flag pole and raise it for the Inquisition to complete the quest "Capturing Caer Bronach". You will get 1934 Experience, 1600 Influence, and +5 Power.

Note: Taking over the Fort also gives you the "Escape routes for agents in Crestwood" War Table Operation and the quest "Rift at Caer Bronach".

While we are here, talk to the new castle care-taker, Charter, for the quest "High Stakes". We can sell stuff and craft stuff here too. Nearby the craft
weapon station is a door. Inside of it is a mosaic piece you should definitely nab now. There is also a ladder leading down to a small cave area. Head down
there and kill the spiders you find (including an elite spider named "Snowball") to also acquire the Healing Mist Grenade Recipe off of Snowball's corpse. Ah,
poor Snowball! This cave leads to a door by the lake, by the way. Good for some sort of secret escape!

We should also explore the upper level of the keep while we are here. You can find Hard in Hightown: Chapter 4 up on top level laying around. You can also talk to a guard by the flagpole for the "Weeding Out Bandits" quest, which you may as well pick up. Lastly, there is a staircase up to the spy room nearby you can unlock with a rogue. Do so and grab the Caer Bronach codex and the A Magister's Needs  codex. Talk to the spies.

With all that done head through the marked door by the merchant to be led outside to the dam. At the end is a tavern you will have to load into. Inside are some teenagers who can be talked to. Go upstairs to see The First Blight: Chapter 1 codex, and then go hit the dam controls for a scene. Head outside when you are done.

The water has lowered. You can access a part of old Crestwood now (and you can do the "Rift at Caer Bronach" quest easily now. Head back to see a dragon fly overhead.

Explore Old Crestwood for the many chests and Bottles of Thedas you can find. You can also get the "Burdens of Command" quest from a Wraith here and find the Mayor's Old Home. North of all of that though you can find the entrance to The Flooded Caves. Take some time to do the quest  "Homecoming" and search for loot and bottles in the flooded village though, by all means. Enter the caves when you are ready.

We're in a cave now, but there are lanterns all over to provide light. Behind the platform you arrive on is a chest. Follow the path down lighting lanterns. At the big open room and can move around the sides of the area to fight some corpses in the back and find another chest, then you must go down. At the bottom of the wood walkway you can once again move around the side of the area (away from the obvious tunnel) to find a third chest. Now, follow the tunnel to another wide-open area.

Up ahead is a Despair Demon and some Corpses. Kill them all. Before you go down the slope nearby, check out the tunnel on the right for a chest and a pile of bodies you can examine.

Take the slope down to the bottom area on the left. Down here look to the left as you go to find a door a rogue can open. Inside is the Paragons Known and Lesser Known codex and a chest. Up ahead is a Rage Demon you can kill for the "Burden of Command" quest.

Continue forward until you come to an area with a door, an open door to the rift, and a smashable wall. Smash the wall and drop down to find two chests in a tomb-area, as well as a mosaic piece, then climb back up.

Before you go tackle the rift, take the nearby door. This leads to a very wide-open dwarven area. Explore it to find a mosaic piece near the central throne area and a chest near an elven relic. Activate it and head further in, checking near the doorways for another chest. This area further in will lead to some nugs and, finally, to a ladder leading out of the Flooded Caves. Go and exit the caves.

Once you are out, climb the ladder and make your way to a door, where you can find a chest and mosaic piece  nearby. Hit the lever to open the door. This leads to the cave on the northeast portion of the map.  Go ahead and head back to the doorway with the rift now.

Head inside and fight the rift. Unlike most rifts, this rift will have four phases before you can shut it. Still, the monsters here are weak. Wraiths and Shades, Lesser Terrors and Rage Demons. All easy to kill, so go wild and shut the rift when you can. Note that you can find the unique Axe of Green Edges among the loot on the rift, as well as a chest in this room along the walls.

We need to go tell the mayor what happened. Head back to Crestwood now (you may as well turn in the "Burden of Command" quest while you are at it) and you'll find the mayor is gone. He left a note though. Read it to add the Letter of Confession to the codex and add the "Find Crestwood Mayor" operation to the War Table. And with that done, this quest is complete.

NOTE: The boarded-up house is not un-boarded. Be sure you visit it for the chest  inside but also loot that gives you an Amulet of Power for the Inquisitor.