Cullen is an NPC in Dragon Age 3: Inquisition that joins the Inquisition as an advisor, but does not join your party as a companion. c 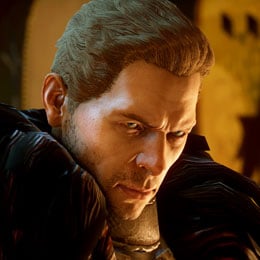 "Cullen has seen the worst that magic and corruption can do to innocent people. Trained from a young age, he has devoted more than half his life in service to the Templar Order. He saw the Ferelden Circle fall during the Blight and was witness to the mage-templar conflict that tore Kirkwall apart. In the aftermath, it was Cullen who rallied what remained of Kirkwall's templars to restore order to the devastated city. His leadership and integrity caught the attention of Cassandra Pentaghast, who recognized in him a vital component in forming the Inquisition. Now the world is falling into chaos. Cullen is through waiting for others to act, and he's determined that the Inquisition will make a difference for the people of Thedas."

No: Cullen is an Inquisition Advisor and will only operate with you via the War Council and War Table.

Cullen is a Templar Commander who becomes an advisor to the Inquisition. To initiate a romance plot, the player must be female and human or elf, and must take all available opportunities to flirt during dialogues. Being in a relationship with anyone else will make Cullen's options not available. To ensure progress in your flirting, do not have Cullen take lyrium at any point. If you do, he will not romance you and even break up with you.

Cullens approval rating is not available in the game. Advisors are not affected by the approval system, there is no way to gain or lose approval with them. To create a relationship, you must focus on flirting conversation points. You should be wary, however, to never give Cullen Lyrium or he will not romance you.

"...None made quite the entrance you did."

"...Now it seems we face something far worse."

"...Tell me about templar life." (investigate)