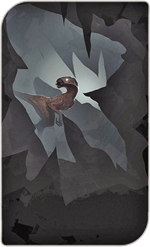 “One of the few natural, non-darkspawn creatures to live in the Deep Roads, the deepstalker is a reptilian cave-dweller known for burrowing into the stone paths of the Deep Roads and ambushing prey, usually nugs. They hunt in packs, attacking with round mouths of serrated teeth or spitting poisons from venom glands. Although a single deepstalker poses little threat to any experienced explorer, packs can be lethal.

— From Tales from Beneath the Earth, by Brother Genitivi