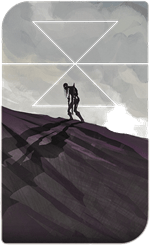 “Among the saddest legacies of the Fifth Blight are those poor souls who survived the darkspawn attacks across Ferelden only to succumb to the corruption of the Blight itself. We have seen animals—birds, wolves, and even bears—corrupted into mindless ruinations of their former selves, but humans are by no means immune. Those unfortunate victims not killed quickly by contact with darkspawn blood or disease become mad with fever. Their bodies lose their hair and become misshapen with sores; in their last lucid thoughts, many speak of hearing whispered words, or a song that no one else can catch. It is vital that once victims begin hearing such things, they are put out of their misery quickly and mercifully. There are stories across Ferelden of these ghouls, maddened by the corruption of the Blight, attacking their friends and spreading the corruption further. While it is likely that the sickness will eventually kill a ghoul, the dying strength of these poor creatures makes them nearly as great a danger as the darkspawn themselves. They are no longer our friends, our family, or our countrymen. They are victims of the Blight, and must be given the same mercy Hessarian showed Andraste: a swift sword.”

— An excerpt from Marks of the Blight, by Sister Dorcas Guerrin