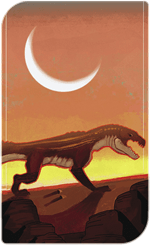 ““I have seen the gurgut basking in a slanted shaft of sunlight in the penumbral canyon, its putrescent tongue scenting the rancid air of the nameless and unnameable swamp, swishing the uncaring grass of the plains with its passage. It is some cousin of the wyvern, but bereft of the savage ferocity for which the latter is praised and hunted by Orlesian nobles. Its thick-lidded eyes stare witlessly, and its jaw hangs agape; it is not befuddled or frustrated by its want of reason, but perfectly content, a drooling idiot. Its pallid belly stretches and distends, disdaining all reason, when it gorges itself upon its prey. I have seen such a lowly beast swallow a chevalier whole, the great and shining warrior taken by surprise in the tall grass, his silverite armor gleaming as the gurgut unhinged its jaw to draw the chevalier in. Across its belly, I saw the kicks and struggles grow frenzied and then still, and the idiot beast settled into a happy torpor. The ruined armor of the noble chevalier lay among the gurgut's spoor several days later.”

— An excerpt from An Anatomie of Various Terrible Beasts, by Baron Havard-Pierre d'Amortisan