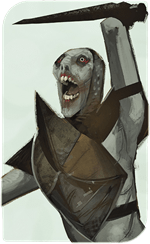 “No one knows where the darkspawn come from. A dark mockery of men: In the darkest places they thrive, growing in numbers as a plague of locusts will. In raids, they will often take captives, dragging their victims alive into the Deep Roads; most evidence suggests these are eaten. Like spiders, it seems darkspawn prefer their food still breathing. Perhaps they are spawned by the darkness. Certainly, evil has no trouble perpetuating itself. The last Blight was in the Age of Towers, striking once again at the heart of Tevinter, spreading south into Orlais and east into the Free Marches. The plagues spread as far as Ferelden, but the withering and twisting of the land stopped well beyond our borders. Here, darkspawn have never been more than the stuff of legends. In the northern lands, however, particularly Tevinter and the Anderfels, darkspawn haunt the hinterlands, preying on outlying farmers and isolated villages, a constant threat.”

— From Ferelden: Folklore and History, by Sister Petrine, Chantry scholar