Josephine is an NPC in Dragon Age: Inquisition that becomes an advisor and ambassador to the Inquisition, but does not join your party as a companion. 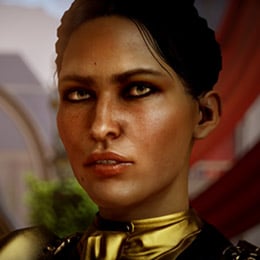 "The Inquisition's power is not absolute: it must earn its place among the forces in conflict. Sister Leliana understands this well, and has called on an old friend, Lady Josephine Montilyet, to be the Inquisition's ambassador in the halls of the influential. The eldest daughter of a noble Antivan family, Josephine is a rising star among diplomats, skilled at forging alliances with tact, grace, and carefully cultivated favors. She is a consummate planner who understands that resurrecting the Inquisition will require support and goodwill from Thedas's movers and shakers. Fortunately, the ambassador enjoys a challenge, and she sincerely believes that the Inquisition is the best way to halt the chaos sweeping Thedas."

No: Josephine joins the Inquisition as an advisor and will only operate for you via the War Council and War Table.

Josephine Montilyet is not a companion but can be romanced. Note: She does NOT have a nude model in game!

As an Advisor to the Inquisition, her role to form alliances and pacts drives her and should be the focus of romancing options, investigating talks relating to politics.