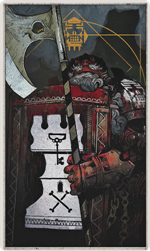 A walking fortress of dwarven steel.


The Legion of the Dead is Orzammar's most famous and dedicated troop of warriors. These dwarves declare themselves dead and venture into the Deep Roads to join the endless fight against the darkspawn pushing toward the gates of their city. Korbin is one of them. A highly decorated warrior from Orzammar, he volunteered for the Legion. As a result of an alliance between the dwarven king and the Inquisition, Korbin now fights on the surface against Thedas's greatest threat.

( Note: Some of the names of the Trees are the same as Single Player, but the Trees themselves are different)