Leliana is an NPC in Dragon Age 3: Inquisition. 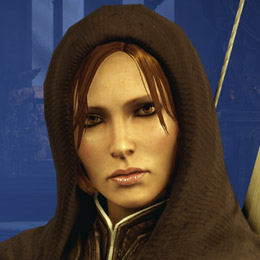 She has many names. Most know her as "Sister Nightingale” or “the Left Hand of the Divine.” To the rare friend, she is Leliana. They say she found faith amid darkness, and that her devotion to the Maker is matched only by her devotion to Divine Justinia V, a woman who is both mentor and savior. Those who have earned her loyalty know her as a steadfast ally. But enemies of the Divine know to fear her, for she is the shadow behind the Sunburst Throne—the one who watches and waits, who strikes when her mark is most vulnerable and least suspecting.

No: Leliana is an Inquisition Advisor and will only operate with you via the War Council and War Table.

Leliana is not available for romance.

Leliana approval rating is not available in the game. Advisors are not affected by the approval system, there is no way to gain or lose approval with them. She is also not available to romance, so your relationship with Leliana will be one of dialogue and quests only.