An eccentric dwarf with an assortment of strange brews and explosives. 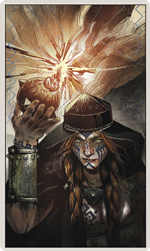 Luka remembers the prison in the Vimmark Mountains: She was nobody, clearing out tunnels for the Carta, not important enough to know the truth about why they were there. She watched as the Carta descended into madness, never learning who pulled the strings. When Hawke destroyed the prison, she was trapped, alone and forgotten. It took years, but she got out, using salvaged treasures to blast her own exit to freedom. Then the Inquisition came calling, because they also remembered the prison—and what was held there.