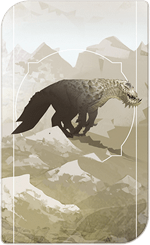 “You want to hunt lurkers? All right, then there's a few things you should know. First, they don't just live in caves. Some of the locals call them ‘cave lurkers,' but I've seen them in the wastelands, in the marshes...really anywhere you think creatures shouldn't be able to live. Why? Because they eat almost anything and they eat rarely. When they're not hunting, they curl up in a sort of hibernation to conserve energy. If you can catch them in that state, consider yourself lucky. If not, you'll need to be on your toes. They're quiet when they want to be, you see. Hence the ‘lurk' part of their name. They hunt in packs. They spit poison. In fact, I've lost more than one fellow because a group of lurkers descended upon him while he took a piss in the bushes. They surround him, paralyze him, and then tear him to pieces—all without the rest of the camp knowing a single thing was going on, not 20 feet away.”

— From The Most Dangerous Things to Eat, by Pol Ageire Phridee