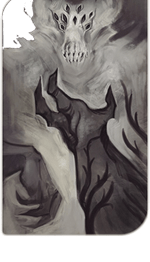 “The most powerful demons yet encountered are the pride demons, perhaps because they, among all their kind, most resemble men; as clever and manipulative as the desire demon, with a penchant for cruel irony that is almost human. While the demons of desire largely engage in the bribery of mortals, pride will use mortals' own best nature against them. Clever men outwit themselves. Strong men crush themselves. Humble men forget themselves. Jealous men fear themselves. They turn corruption and ruin into an art.”

— From Beyond the Veil: Spirits and Demons, by Enchanter Mirdromel