Sera is an NPC in Dragon Age 3: Inquisition who may join you as a Companion.

"Sera is impulsive and revels in the moment. For her, it's not about what's right, it's about what's right now. In the Friends of Red Jenny, she humbled authority and had fun doing it. But now the nobility are being not just selfish but blind. War, demons, a torn sky: these are more than troubling—they're terrifying. Fortunately, Sera and her "friends" can be frightening, too, and if she needs to put an arrow through some baddies so regular people can sleep at night, so be it. Sera fights for those caught in the middle, but she also needs order restored. The world has to be normal so she can play."
Despite being an Elf Sera wears "Human Trained" equipment, this leaves any "Elf Trained" rogue equipment the sole property of the Inquisitor

How to Romance Sera

Sera is an eleven archer that joins as a companion in Orlais. Impulsive, playful and cynical, Sera is a strong-headed character with severity in her punishment of enemies and betrayals. Players looking to romance Sera should focus on making choices for the benefit of many, and being humorous. 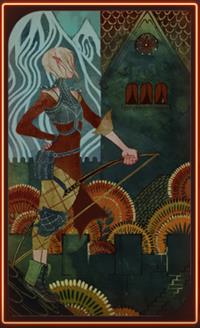 Sera Approval rating is determined by your choices in conversation and in the game decisions in Dragon Age: Inquisition. Below is a list of all her reactions to quest and personal dialogue. Approval rating may be checked at the "Gather Party" screen by observing the cards, or by the interactions with the NPC.

The Temple of Mythal

Samson: "So, Inquisitor. How will this go?"