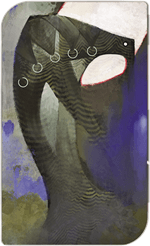 “These demons watch. They lurk. They envy. In time, such a demon will learn to drain energy from the psyche of those it encounters, just as it did in the Fade. Once it has drained enough, it has the power to manifest and will forever be known as a shade. Such a creature spurns possession. It instead floats as a shadow across its piece of land, preying upon the psyche of any who cross its path. Perhaps it believes itself still in the Fade? There is evidence to believe this is so.”

— From Beyond the Veil: Spirits and Demons, by Enchanter Mirdromel