A cold mistress of magic with terrifying power. 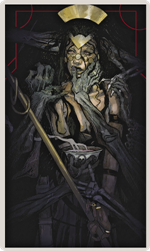 Raised in secret in Nevarra by a Mortalitasi mage, Sidony was brought up to revel in her magical abilities. She feels no kinship with mages who do not share her pride and has little but disdain for most other people. Sidony's only goal is to uncover her full potential as a mage, so she hungers for magical knowledge. When news of the Breach reached her, she headed directly to see it for herself, hoping that whatever secrets it held would be the key to her own advancement.