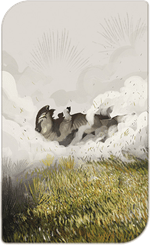 “And then going through the Dales, we see one of those long-nosed pigs with the stump legs. It's just crossing the highway, dragging its stupid belly along the ground, as they do. Bless the Maker and all, but He was deep in His holy golden cups the day He made that thing. Anyway, I turn to Lockey, and I say, “Hey, it's one of them snufflers.” Marchand starts in with his giggle. Lockey and me, we look at him. “Snuffler!” he says, like he just caught me naked with his lady mother. “Non—tu dois dire ‘snoufleur.'” Because “snuffler” just isn't fancy enough for Orlee. So I say it like he does: snooooou-fleeeeur. Can't keep a straight face. Marchand goes red like a virgin with skirts blown up. And good old Lockey, he just shoots the thing with an arrow while it's snuffling its way across the road. “Now it's dead, and we call it dead,” he says. That was that.

— From the hunting log of Kerr of West Hill, dated 17 Solace