Bioware have provided a timeline of events that are relevant to the game. [1]

Andraste preaches of a new creator, whom she calls the Maker. The more she says, the more her following grows. Maferath uses her teachings to unite the Alamarri clans under his authority.

Andraste's disciples create the Chant of Light, collecting her teachings into hymns.

The Inquisition is founded around this time. The loose association of Andrastian hard-liners hunt heretics and mages in the name of the Maker.

Drakon formalizes the Cult of the Maker, creating the Chantry.

Divine Justinia I is named the first Divine of the new Chantry.

Circle of Magi is Created

The Circle of Magi is created as part of the Nevarran Accord. Mages are now formally permitted to practice magic under the close watch of the Chantry. 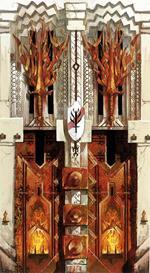 With the creation of the Circle, the Templar Order is formed to police magic use. 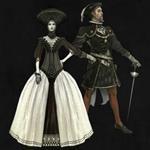 The Winter Palace, by far the most prominent structure in Halamshiral, becomes a regular seasonal retreat for the empress and selected Orlesian nobility.

Queen Moira is assassinated. Orlesian forces leverage her death to tighten their grip on Ferelden. Her son Maric escapes.

House Tethras is exiled to the surface for denying the Voice of the Ancestors and willfully manipulating the sacred Provings.

The Dragon Age begins. It is predicted to be an age of violence and upheaval. 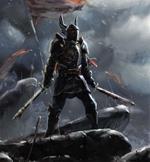 King Maric allows the Grey Wardens to return to Ferelden after two ages of exile for their failed coup attempt. 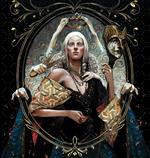 Empress Celene I ascends to the throne in Orlais. 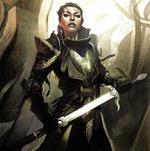 Cassandra Pentaghast Named a Hand of the Divine

The Grand Cathedral is set upon by dragons during a ten-year gathering of Chantry faithful. A young Seeker named Cassandra Pentaghast foils what is revealed to be a conspiracy to kill Divine Beatrix III. She is named a hand of the Divine.

The Hawke family flees the destruction of Lothering and travels to Kirkwall, where they begin indentured servitude in order to obtain entry to the city. 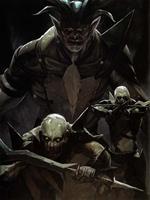 The shortest of the five recorded blights begins in the Korcari Wilds of Ferelden after the Architect attempts to make a disciple of the Old God Urthemiel.

A Qunari dreadnought is shipwrecked near Kirkwall, stranding their Arishok and hundreds of soldiers in the city. They refuse to leave until they recover the stolen Tome of Koslun.

Hawke enters the Warden prison in the Vimmark Mountains and attempts to destroy Corypheus. History is vague on when exactly this occurs.

The eldest Hawke, released from servitude, helps fund an expedition into the Deep Roads with dwarven brothers Bartrand and Varric Tethras.

A united Ferelden, led by the Hero of Ferelden, slays Urthemiel at the Battle of Denerim, ending the Fifth Blight.

The Deep Roads Expedition at Kirkwall discovers an ancient thaig that predates the First Blight. Inside is lyrium that glows red. An idol made of the strange lyrium is recovered.

Hawke successfully drives the Qunari out in the First Battle of Kirkwall, and is named Champion by Kirkwall's Knight-Commander Meredith Stannard. 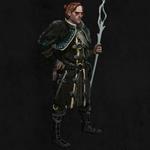 Anders, an apostate and friend of Hawke, destroys the Kirkwall chantry with the grand cleric still inside, inciting the Mage-Templar War that spreads throughout Thedas.

Hawke leads the push to stop the mages and templars as they clash in Kirkwall. The city's First Enchanter Orsino and Knight-Commander Meredith are both killed.

Seeker Cassandra Pentaghast, acting under the authority of the Divine, arrives in Kirkwall and interrogates Varric Tethras about Hawke. 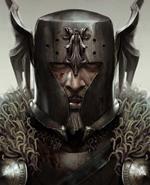 Lord Seeker Lambert declares the Circle of Magi no more