Vivienne is an Companion in Dragon Age 3: Inquisition.

"Referred to as Madame de Fer, “the Lady of Iron”, Vivienne lives up to her title. A leader among the mages and official enchanter to the Imperial court, she is renowned as a fearsome woman who achieved her position through guile and deft political maneuvering. Vivienne allows nothing to stand in the way of what she desires—not those who claim she is a social climber, not those who seek to restrict her power, not even her fellow mages who would conscript her into a rebellion with which she disagrees. Vivienne fights to restore order in a world gone mad…so long as that leaves her among those left standing, once all is said and done."

How to Romance Vivienne 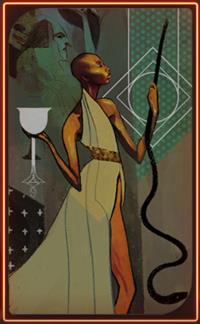 Vivienne's approval rating is determined by your choices in conversation and in the game decisions in Dragon Age: Inquisition. Below is a list of all his reactions to quest and personal dialogue. Approval rating may be checked at the "Gather Party" screen by observing the cards, or by the interactions with the NPC.

Recovering Tomes with Vivienne in your part will grant (+1) Approval. There are 3 in total. Speaking to her in Skyhold after gathering all three gives you (+3).

"Tell me: why were you at the Divine Conclave?"

"Whatever the truth is, that belief gives you power?"

"And now many believe you are the agent of His will. Whatever the truth is, that belief gives you power."

"... Should the circles return"

"...But the Enemy struck a serious blow against you and the Inquisition. We must recognize that. You must.

After What Pride Had Wrought

"...that Morrigan will use her new power against us."