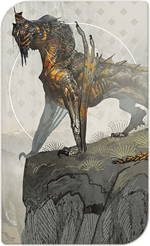 “The wyvern—like its relative the dragon—has nearly been hunted to extinction. Wealthy Orlesians are particularly fond of the wyvern chase, although their servants and dogs take the risks while the noblemen merely accept the praise. It is the venom that makes the creature so valuable. It's used in potion-making, alchemy, and the production of a rare and potent liquor called aquae lucidius. The minuscule quantity of the venom remaining in the aquae after distillation leads to a unique hallucinatory effect.

— An excerpt from the Wilds of Thedas: Volume Two, by Stephan D'Eroin