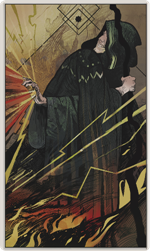 Rion was one of the first mages in the Ostwick Tower to take up the flag of rebellion. Horrified by abuses he saw in Kirkwall, Rion embraced the cause with fervent idealism...and very little sense of its practical costs. His ardor dampened as he saw the rebellion's price measured in lives lost, mage and non-mage alike. Now supporting the call for peace, he went to Haven to await the Divine Conclave's outcome; when the temple was destroyed, his hope for a resolution was lost. Rion signed up with the Inquisition, seeing it as the mages' last chance for peace.