Morrigan is an NPC in Dragon Age 3: Inquisition and a long lost companion of the Hero of Ferelden Grey Warden in Dragon Age: Origins. 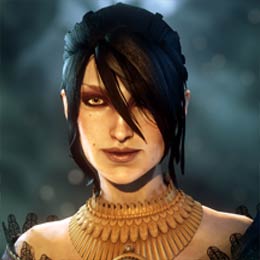 "Whether the dark-haired sorceress seeks to influence the Imperial throne, or harbors more sinister motives, no-one knows for certain. This Witch of the Wilds arrived in Orlais rather suddenly three years ago as the newly-appointed “arcane advisor” to Empress Celene. In this role, Morrigan presents a source of information unfiltered by religious dogma, and satisfies Celene's life-long curiosity about magic. However, whispers carry concern of Morrigan having Celene wrapped around her finger, teaching the Empress forbidden, dark arts in secret."

No: Morrigan will not joing your party

Morrigan is not available for romance