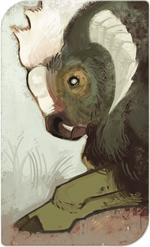 “As I searched for my courage, I heard a crashing through the undergrowth. Bandits, I thought. Or a bear. But instead it was a giant beast, with pelt of blue-gray and gleaming black horns. And riding its muscled back was my Guy. The druffalo was enormous but gentle as a doe. The children called her Bluebell.”

— From a diary found in a refugee tent in the Hinterlands