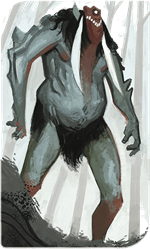 “I followed one specimen from the north, where they are somewhat more common (Tevinter breeding grounds? Warmth of the seasons? Corruption of Silent Plains?). It followed waterways, preferring to float its bulk, but never did I see any sense in its eye, and never did it appear to plan beyond its immediate surroundings. But I remain intrigued, for they wave hands, and that means potential to raise them in praise. Throughout creation, upright beings with hands have been a sign of greater purpose. What lesson, Maker, in these strange children? I will approach tomorrow, in your name.”

— Last entry in The Letters of Brother Estomahr